only for taiwanese view 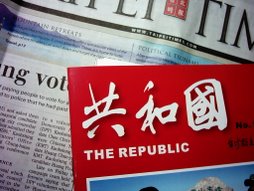 view it and link it 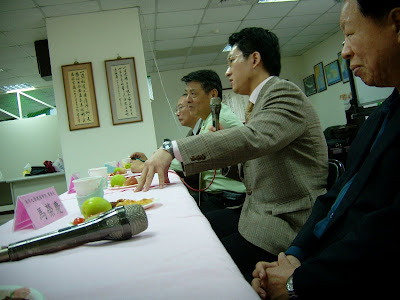 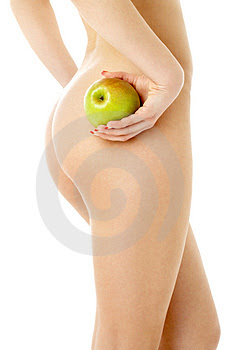 Taipei Times /April 7, 2007
1
Climate change report leaves scientists ruffled
AP, BRUSSELS
"The authors lost."－a scientist who helped in the drafting of the climate change
report
An international global warming conference approved a report on climate change
yesterday, chairman Rajendra Pachauri said, after a contentious marathon session that
saw angry exchanges between diplomats and scientists who drafted the report.
"We have an approved accord. It has been a complex exercise," Pachauri told
reporters after an all-night meeting of the International Panel on Climate Change.
Several scientists objected to the editing of the final draft by government negotiators,
but in the end agreed to compromises. However, some scientists vowed never to take
part in the process again.
"The authors lost," one scientist said. "A lot of authors are not going to engage in the
IPCC process anymore. I have had it with them," he said on condition of anonymity
because the proceedings were supposed to remain confidential.
A reporter, however, witnessed part of the final meeting.
The climax of five days of negotiations was reached when the delegates removed
parts of a key chart highlighting devastating effects of climate change that kick in
with every rise of 1oC. There was also a tussle over the level of confidence attached
to key statements.
The US, China and Saudi Arabia raised the most objections to the phrasing, most
often seeking to tone down the certainty of some of the more dire projections.
The final report is the clearest and most comprehensive scientific statement to date on
the impact of global warming mainly caused by human-induced carbon dioxide
pollution. It predicts that up to 30 percent of species face an increased risk of
extinction if global temperatures rise 2oC above the average of the 1980s and 1990s.
Taipei Times /April 7, 2007
2
Areas that now suffer a shortage of rain will become even drier, adding to the risks of
hunger and disease, and the world will face heightened threats of flooding, severe
storms and the erosion of coastlines, it said.
Will of heaven?
Falun Gong practitioners in Ilan County yesterday call on Chinese to withdraw from the Chinese
Communist Party (CCP). The two in the center are dressed as ``heavenly generals,'' to signify that the
CCP will soon be toppled by the will of heaven.
Taipei Times /April 7, 2007
3
Posted by hsutung at 7:44 AM 1 comment: 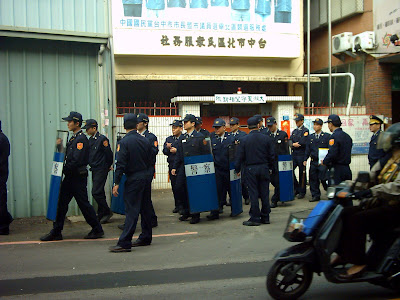 Advertising Video footage televised by nearly all news channels on Monday featuring a gangster demonstrating an array of firearms and threatening to kill his estranged boss was discovered yesterday to have been fabricated by cable television station TVBS.
TVBS issued a statement last night that said it had fired Nantou reporter Shi Chen-kang (史鎮康), who filmed the video, and his superior, chief correspondent Chang Yu-kun (張裕坤).

In the video, Chou Cheng-pao (周政保), a member of the Celestial Way Gang, sat next to a table with a number of pistols and rifles.

In addition to threatening to shoot his former gangster boss, Chou said in the video that he was also behind three recent shooting incidents in the Taichung area.

In its statement, TVBS said an internal investigation had found that Shi had helped Chou film the video.

According to the TVBS, Shi explained that Chou asked him for help on Saturday afternoon. He decided to make the video because he found it newsworthy, the station cited Shi as saying.

Shi asked Chang not to tell TVBS managers about how he got the footage, TVBS said.

Yang Ying-lan (楊英蘭), an official with the National Communications Commission (NCC), disagreed with TVBS' position that the two reporters were solely responsible for the incident.

"The footage has been broadcasted again and again," she said. "How can the management at the station get away with simply saying that it was just the reporters' fault?"

When asked if the incident will cause the station to lose its broadcast license, Yang said the penalty will ultimately be determined by the commission's members.

If the commission finds the Chou video to be a serious violation, the station will be asked to stop broadcasting for three days.

Cabinet Spokesman Cheng Wen-tsang (鄭文燦) said last night that Premier Su Tseng-chang (蘇貞昌) was very upset upon hearing that the video had been filmed by Shi. 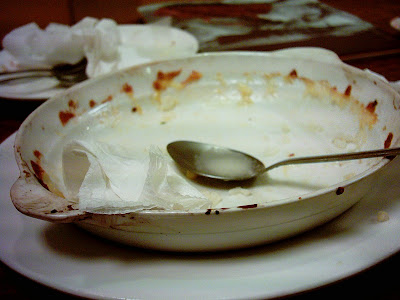